An update from Kath’s friends 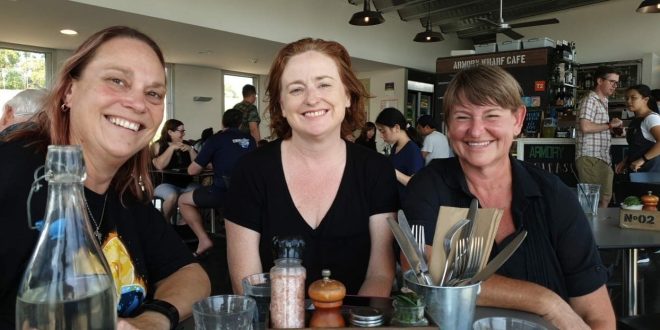 Three of Kath’s school friends – Megan, Tracy and Alana (pictured above at a cafe near Silverwater Jail – visited her over the weekend and report that she is in good spirits and looks well.

She’s both cautiously optimistic and careful not to get too hopeful about the outcome of the upcoming inquiry into her case.

Alana said the four chatted about everything from the mundane to the life changing during the visit.

“Kath told us about savouring her first taste of fresh cream in 16 years when a prison staff member gave her a slice of sponge cake,” she said.

As for the life-changing, Alana added: “I was floored by how huge it’s beginning to feel as we count down to the inquiry in March. The evidence in Kathy’s favour is beginning to pile up and there’s a giddy desire to allow a glimmer of hope that the scales of justice will balance.”

Tracy drove down from the North Coast at 1am in the morning so she could be there for a double visit with Kath, one at 8am and one at 12pm. She collected Megan on the way. Following the afternoon visit, they immediately started the trek back, with Tracy breaking the long journey home in Newcastle.

Tracy said: “Kath thanks everyone for their continued support. Especially the legal team, as there is a massive amount of time dedicated on their part for discussion, research, preparation and collation for the enquiry, even before representation at court.

“Kath dreams of a day in the not too distant future where she gets to thank you all in person for your support.”

A fourth directions hearing has been listed at 10am on Monday, February 11, 2019, at a location to be confirmed.

Substantive hearing dates for the hearing of expert medical evidence by the inquiry have also been set down.

The week beginning Monday, March 4, 2019, has been set aside to hear evidence relevant to forensic pathology and Sudden Infant Death Syndrome (SIDS) or Sudden Unexpected Death in Infancy (SUDI).

The week beginning Monday, March 18, 2019 has been set aside to hear evidence relevant to genetics and cardiology.

The substantive hearings will be held at the Chief Secretary’s Building and the Coroner’s Court in Lidcombe.